We’re walking for a world without breast cancer

Join the fight and register to walk with us

"I was diagnosed with breast cancer in October 2012. The diagnosis came as a huge shock as I was only 42 and breastfeeding my youngest daughter at the time. There is no history of breast cancer in our family so cancer wasn’t on my radar at all.

I was very lucky that they type of cancer I had was very treatable and had not spread to my lymph nodes. After undergoing a mastectomy, I had six months of chemotherapy, five weeks of daily radiotherapy and a year of Herceptin. Treatment finished in March 2014. I am taking Tamoxifen for another 9 years and am hoping to get breast reconstruction surgery in November 2014. 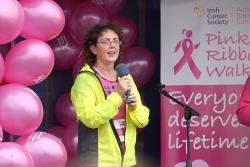 I was honoured to be asked to be spokesperson for the Boyne Valley Pink Ribbon Walk 2014. My involvement with the Walk began the previous year. I signed up for the Walk as soon as entries opened in 2013. I was having a tough old time on Taxol. I found the weekly chemotherapy grueling and I wanted to have something to look forward to, something to aim towards. I've always run and I was keen to get back running as soon as treatment finished.

Exactly one week after my last dose of chemo, I started back jogging – painfully slowly, barely more than a walk but it was still jogging. I managed to keep jogging throughout the radiotherapy too. On the day of the Walk, I got carried away by the occasion and managed to run the whole 10k - barely a month after I had finished radiotherapy and barely three months after I'd finished chemotherapy.

The 2013 Pink Ribbon Walk was a hugely emotional experience for me. My family supported me literally every step of the way. And my eldest actually ran the last 7 k with me. I don't think he even raised a sweat! I raised over €1300 for Action Breast Cancer, so I was rather pleased with myself. 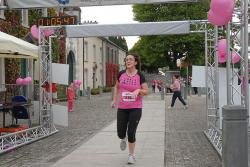 there was great support along the route from the very friendly and encouraging volunteers. The route was just stunning. We were privileged to be able to walk and run through such beautiful countryside and on such a lovely Autumnal day.

Being spokesperson was actually very therapeutic. I’ve a busy life with three children and a full-time job so I don’t have much time to reflect on what I have been through. It was emotionally quite difficult to go back and think about my diagnosis and the treatment. But it turned out to be really helpful talking about it on the radio and at the race warm-up and again in the newspaper. I got so many kind words from well wishers, friends, neighbours and colleagues and raised lots of money for Action Breast Cancer."

Maedhbh is married to Oisín and they have three children – aged four, five and fourteen. She is an Executive Librarian with Meath County Council Library Service. Our thanks to Maedhbh for being our Spokeperson in 2014 and for writing such a lovely blog post.

"Being a spokesperson for the Pink Ribbon Walk was actually very therapeutic," says Maedhbh Rogan-McGann